Maria Montessori: Her Life and Work 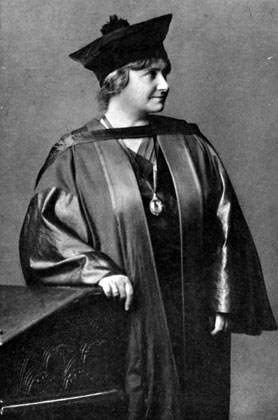 Maria Montessori was a visionary who was simultaneously ahead of her time and completely timeless. The brilliant founder of the Montessori method was born in Italy in 1870, into a patriarchal society, which placed limits on appropriate levels of education for women. Montessori would surprise her countrymen and her own father by crossing boundaries in science and medicine that no other woman had crossed, finally using her scientific approach of observation to develop a revolutionary method for educating children.

She grew up as the daughter of a nobleman and chose to study engineering during preparatory school, which was a school that was mostly attended by males. She went on to study biology and medicine at the university level, much to the chagrin of her conservative father. Her mother had always encouraged her to be curious, supported her daughter and was very close to Maria throughout her life.

While studying medicine, Maria was met with the jeers and ridicule of her male counterparts, who made her perform her autopsies alone at night by candlelight because it was not appropriate for a woman to be studying the human body in mixed company. Despite this, and other, hardships, Maria graduated at the top of her class and made a graduation speech that impressed her fellow graduates and her father as well, and gave insight to her feisty and fiery character, as well as her ease and confidence in public speaking.

After medical school, she followed her socially conscious mind and generous and loving heart by working with neurodiverse and special needs children. She had visited a school for such children and watched them as they played with their scraps of food and believed that these children were acting this way because they had no other items to manipulate with their hands, and that the movement of the hands was essential to human development. She used the research and materials of doctors Itard and Seguin, such as the red and blue rods, the sound cylinders, and the teen boards to help these children develop and refine their senses. She also taught them practical life lessons, such as hand washing and table manners. These special needs children ended up doing well on a national test, and Montessori went on to study psychology, anthropology and philosophy to be able to expand on the question forming in her mind about how children learn.

Montessori was later asked to work with “little vandals” in a housing tenement in Rome and provide them with some instruction while their parents were at work in the factories. In the school, called Casa dei Bambini, Montessori used the same practical life lessons she has used before, as well as the materials created by Seguin and Itard, but she also made use of the pink tower (an intelligence test used to assess illiterate factory workers), and focused on teaching the children differences between shades of colors, degrees of sound, gradations in size and other lessons that refined the senses. Montessori believed that refining or sharpening the senses made children more observant, more discerning, more intelligent and more like little scientists, which would allow them to understand themselves, the world around them, and their place in it.

In this first school, she also scaled furniture down to child size and used open shelves so that children could freely choose their work and be responsible for both setting their work out and returning it. In some of her earliest efforts, she had the teacher both retrieve and put away the work, but noticed that the children always crowded the teacher who was doing so. She realized, through observation, that children wanted to be the masters of their own environment, not only doing the work on their own, but taking it out and returning it themselves. She also incorporated movement throughout the day, allowing children to choose their own workspace. Her methods allowed children to develop at their own pace and to work uninterrupted or dominated by adults for long periods of time.

As the children in her school grew, she developed more materials to meet their needs. She developed language and math lessons, as well as other practical life and sensorial lessons. She allowed children freedom to move outside and incorporated gardening, music and art into her classrooms. Children in her classrooms collaborated freely, rather than being in competition with one another. Her child led method allowed children to reach their fullest potential and develop into compassionate, caring humans. 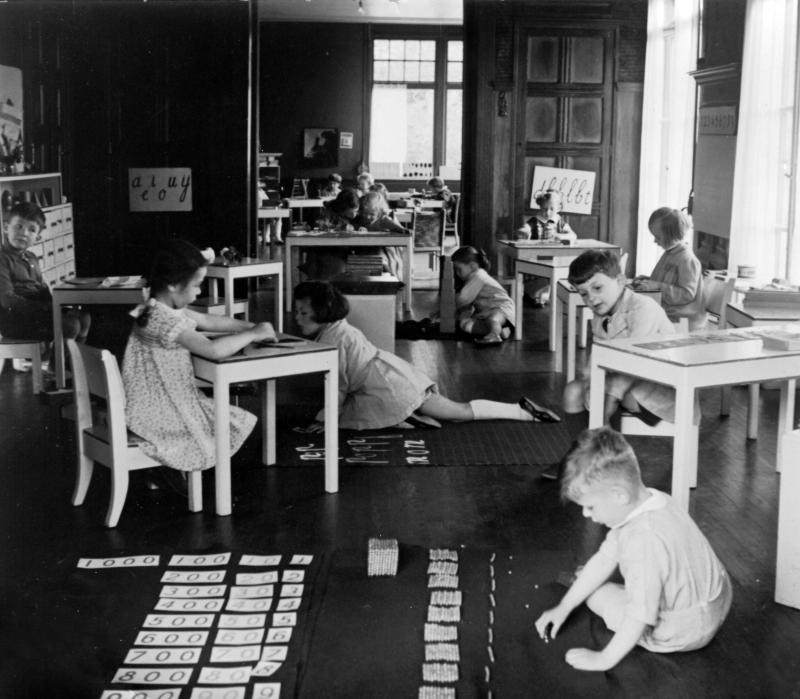 Her work was, and still is, groundbreaking. Dr. Montessori went on to train hundreds of teachers, although she was never a teacher herself. She set up schools in Italy and the rest of Europe, as well as India. She lectured in both North and South America. She was later joined by her son, Mario, who became her close colleague and collaborator and went on to develop some of the more advanced math materials, such as the binomial and trinomial cubes. Many educators today may think that Montessori’s methods are outdated because they lack technology or flashy delivery, or interactive multimedia presentations, but none of those are essential to human development. Refining the senses, training the hand, improving concentration and work ethic, being a collaborative worker, caring for living things and taking care of your environment are all basic tenets of humanity that have not changed. Indeed, the basic tendencies of man have not changed at all, and the Montessori method is just as relevant today as it has ever been.

Montessori died of a stroke in 1952. She had been planning to go and train teachers in Africa at age eighty when she died. Her son Mario took over her work and her organization, the Association Montessori Internacionale. Since her death, her legacy has lived on. Montessori schools are located all over the world, and teachers are still learning the “child’s method” through training programs on almost every continent. Montessori’s legacy continues to grow and expand, and reach more and more children. Our world needs Montessori’s methods now more than ever to usher in an era of peace and understanding, for it truly is the child who makes the man.